What Steps Can I Take to Protect My Tooth Enamel?

In the first decades of their lives, everyone takes their teeth for granted. They brush and floss like they were taught, but it isn’t until they are in their 30s that most people realize they weren’t doing a proper job of it. It starts with cavities, but gum disease sets in because they don’t clean off the sticky film called plaque effectively.

Bacteria thrive on it and an infection sets in called gingivitis or gum inflammation, the first stage of periodontal disease, which can ultimately lead to losing teeth. The first step in stopping this, which affects three out of four Americans, is to have your dentist or hygienist show you exactly how to brush and floss.

The next step is to understand what else you can do to protect your teeth and it starts with understanding their structure. At the center is the pulp, which consists of soft connective tissue, nerves, and blood. This is surrounded by a protective layer called the dentin, which is the white color that your teeth naturally show. The outer layer is called the enamel and is translucent. It is the hardest material in the body, but is prone to chipping, cracking, or being worn away, sometimes from grinding teeth while sleeping. Called bruxism, this is the result of emotional or physical tension, and the damage can be stopped by having your dentist create a customized mouth guard to wear at night.

But the most important step one can take to protect the enamel is to avoid foods and beverages that harm it. Primarily, that means most forms of sugar, which stick to the teeth and attract the bacteria that produce acids that eat away enamel. To prevent this, you would need to brush and floss soon after consuming sodas, candies, ice cream, and sweetened coffee and tea. Also, you should avoid acidic foods and those high in natural sugar, including tomatoes, grapefruit, lemons, limes, and oranges. To satisfy that craving for a sweetener, dentists recommend xylitol, which is a natural substance that fights tooth decay: https://xylitol.org/xylitol-uses/dental-benefits-of-xylitol/

Another contributor to eroding tooth enamel is drinking alcohol, because of its sugar content and it also dries the mouth, reducing the ability of saliva to combat bacteria. If you consume alcohol, lower-sugar forms would be best, such as light beer, gin and tonic, or brut champagne, and then take a drink water afterwards.

Finally, it is important to eat a healthy diet, especially proteins, vegetables, and complex carbohydrates, like seeds, nuts, beans, and whole grains (simple carbs like white rice and white flour quickly turn into sugars). For more information, you can connect with Dr. Song’s team, serving the areas of Berkeley, El Cerrito, and more. 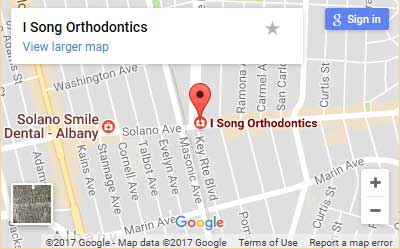 Copyright © 2022. I Song Orthodontics - Serving the areas of Berkeley, Albany, El Cerrito, and more, we are committed to providing patients with a friendly staff, skilled doctors, and excellent orthodontic care, including braces and Invisalign. | Sitemap | Orthodontist SEO by Proactive SEO Solutions